From Methodist Church to Architectural Firm in Nashville, TN

This article explores the history of a church that is now being used for another purpose. Congregants built Elm Street Methodist Church in a bustling neighborhood just south of Nashville, Tennessee. The neighborhood was long ago incorporated into the city of Nashville, and it has shifted from largely academic and residential to commercial. The building that housed the congregation at Elm Street served as home to Tuck-Hinton Architects at the time of writing. The commercial nature of the adaptive reuse of this religious building as well as the character of the neighborhood do not easily lend themselves to cultural interpretation. They do maintain historical photos of the building in the vestibule, among other things. The partners at Tuck-Hinton embraced the religious iconography of working in a former church and did their best to honor its history. However, during revisions for the article, Tuck-Hinton sold the building, wanting to move to a larger adaptive-reuse space. Coincidentally considering the piece below, the new owners announced in May 2018 that they’d be partnering with Bob Dylan’s Heaven’s Door whiskey brand in this former church. 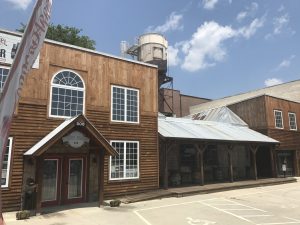 This book chapter discusses three contemporary distilling businesses that make use of historic buildings to market their products. In it I detail the history of these spaces and evaluate the links between historic preservation, cultural tourism, and moonshine distilleries. This chapter builds on my previous work on adaptive reuse, looking at different building types. Moving on from that work, this chapter moves into the debates surrounding meanings of heritage and cultural tourism. In it I argue that contemporary distillers are using historic buildings to make claims about the authenticity of their product that may or may not be justified.

Getting to the Heart of Preservation: the Place of Grassroots Efforts in the Contemporary Preservation Movement

This piece moves the issue of adaptive reuse forward by exploring grassroots work and how social change affects preservation. Through briefly reviewing two case studies of community activism, one of which is centered around the adaptive reuse of a building that served both as a synagogue and as a Buddhist temple, in this chapter I question much of the base history of historic preservation practice in the United States. I argue that many community activists fight to save buildings because of what they represent, while for the past few decades many professional preservationists have fought to save buildings based on their economic value to business communities. Edited by Denise Meringolo, the book is forthcoming from Amherst University Press.

Citation: Kristen Baldwin Deathridge, “Getting to the Heart of Preservation: the Place of Grassroots Efforts in the Contemporary Preservation Movement,” in Radical Roots: Civic Engagement, Public History, and a Tradition of Social Justice Activism, Denise Meringolo, ed., (Amherst College Press).