After we returned from working on the South Abydos Mastabas Project (2011), described below, the excavation team was interviewed for MTSU’s TV Magazine “Out of the Blue.” I am interviewed at 8:15 and 10:30 in the video.

In the summer of 2009 I served as Area Archaeologist on a project in Egypt. I spent the majority of my time training and assisting students who were new to archaeology, but I also excavated in one room of the structure. Below see the final report of that excavation. Please note that I am being deliberately vague in order to avoid pre-publishing anyone’s data.

As a part of the professional residency requirement of the public history program at MTSU, I worked with Dr. Dawn McCormack on the South Abydos Mastabas project, an archaeological excavation in Abydos, Egypt. I served as Excavation Supervisor and Lab Director for this project as a small team, including Dr. McCormack, myself, another graduate student, and three undergraduates (although they all matriculated during the time in Egypt), for five weeks.

Beginning in February 2011, we met several times throughout the semester and did readings to prepare us for the project. I led the discussion of archaeological excavation and recording methods for one meeting. Once we were in Egypt, my role transitioned to that of mentor to the other students. The first week or so of excavation one student who had never excavated before worked closely with me as I explained what we were doing and why before she worked on her own for the rest of the field season. In the field, I would check on the other students and they would come to me with questions when Dr. McCormack was otherwise engaged (or when they weren’t sure if their questions merited her attention). I assisted them with the recording of data and interpretation of evidence, mostly by asking them questions and helping them to recognize other possibilities. I also reminded them of archaeological and site specific protocol. The process was much the same in the lab. I helped us initially get set up and organized and I took responsibility for maintaining organization in the lab, but the students were self sufficient and I simply answered their questions or helped them out when they felt overloaded. This team worked together better than most that I have been privileged to excavate with and that made everything go much more smoothly. Everyone not only pulled their own weight but proved willing to help each other out when work moved slower in one area.

The work with the South Abydos Mastabas project was also a lesson in planning and patience. Excavations in Egypt are planned about a year in advance, so the commitment to the project was made before the official residency period. Dr. McCormack did planning and grant work during the fall semester and I met with her several times and she described that process. Other than doing grant writing first hand, being closely involved with a grant funded project from conception through post-project reporting is one of the best ways to get a better understanding of how that process works. In January, just as we were getting set to start meeting with the team, Egypt’s revolution began and the federal government issued a travel warning for the country. Again, flexibility was key as we made contingency plans in case we were unable to have the field season and we constantly checked the internet for news. The team continued meeting, reading background information, and planning for the trip. I spent time each day reading and watching the news on several outlets and as a result I did quite a bit of background reading on the creation of the current political climate in Egypt.

In the end, although the travel warning was not yet lifted by the government, word came from Egypt and Abydos specifically that things were settled enough for researchers to return to the area and the provost granted us permission to take the trip. We were delayed a bit from our intended leaving date, but in the end, each team member decided to accept the personal risk and make the journey to Egypt. Though I suppose things could have gone differently, the project proceeded without any major incidents and we all felt the new energy in the country. 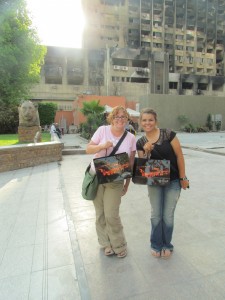 It was an amazing time to be able to go to Egypt and to talk to the people there, although language and cultural barriers kept us from taking full advantage of the opportunity. We were able to see first-hand some of the physical effects of the January 25th revolution–the burned out government building near the Cairo Musuem at Tahrir square, the people selling souvenirs at Tahrir, the stickers and banners all over declaring individuals’ allegiance to the ideals of a new regime, and the removal of Mubarak’s name from public places.

With each project that I am able to be a part of, I learn more about new aspects of history and culture. Sometimes with the focus on attaining new skills and conducting personal research, people can neglect the simple benefit of learning.

I continue to enjoy working with other students and helping them to explore their interests thought archaeology. This team was an outstanding one and so my work as Excavation Supervisor and Lab Director went smoothly. One lesson in that is to take time and consideration when choosing your team; it can make all the difference in not only a pleasant experience versus a rough one, but in how much work gets accomplished. Dr. McCormack’s example and mentorship in this area was important. Dr. McCormack also encouraged the team members to get to know each other some before the project began. This is not always practically possible, but if it can work, knowing team member’s interests, strengths, and weaknesses proves invaluable to teamwork and delegation. Rather than spending time instructing and correcting the other students, we were able to have a more mentor-like relationship. The differences there are subtle but important as it seems to me that people learn better–or at least retain more–when that learning is done in partnership and experience rather than only talking at students.

Such a high caliber of student had the additional consequence that I was able to spend time exploring processes with which I had formerly only had peripheral involvement. Quite a bit of the time was taken with learning ceramics processing. I had done some of this before but in each context there are different types of ceramics and I had never moved past the first phase of this processing. Aside from the obvious benefit of being a new skill, this enabled me to take better notes in the field as the season progressed and I learned more about the site-specific types. On the last archaeological project that I worked on, I learned that I enjoyed/had a talent for inking architectural plans. At Abydos, not only did I have the opportunity to do more of this work, but I was able to spend time inking objects as well. This skill is different and, for lack of a better term, more artistic than architectural inking because stippling must be used for shading and showing the details of objects. With the assistance of one of the more-artistically minded students, I was able to develop this skill that I had only dabbled in previously.

Team members have been interviewed for the MTSU Out of the Blue television program and are in the process of preparing presentations for public discussion of our work and experiences in Egypt.